Back by popular demand  (i.e. one person asked for it yesterday) I bring you an update of my analysis of QC difficulty levels by Setter. It's based entirely on my own solving times and whether or not I achieved my target 10 minutes on any particular day. It's intended as a bit of fun and I am not suggesting for a moment that it would stand up to an objective statistical examination other than of my own failure rate, but when I published previously (in July 2016 and September 2017) it proved to be of some interest.

Setters are once again rated 1 - 10 (easiest to hardest) despite a protest last time that it would make more sense the other way round. I have excluded a handful of setters who gave us fewer than 4 puzzles in the current period (1 September 2017 to 30 June 2019). 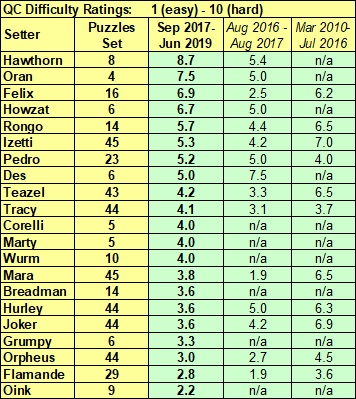